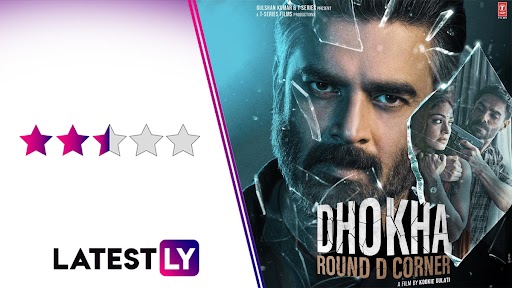 Dhokha Round D Corner Movie Review: Director Kookie Gulati’s Dhokha Round D Corner is an edgy cinematic thriller that has been stretched out beyond its means. The makers have an interesting story at hand to deliver thrills, but in the end one feels this film could easily have been a very interesting and a taut short film that has been converted into a full fledged feature length production. At 1 hour 50 minutes, Dhokha Round D Corner reiterates the complexity of the narrative and plight the complicated character quite unnecessarily and then makes an attempt to offer too many twists in the end in a desperate attempt to deliver the promised ‘Dhokha‘. Dhokha – Round D Corner Actor Aparshakti Khurana Reveals How Co-Star R Madhavan Inspires Him.

The story of Dhokha Round D Corner revolves around Yathartha Sinha (R Madhavan) and Sanchi Kumar (Khushali Kumar) who are trying hard to save their marriage thanks to Sanchi’s deteriorating mental health. Dreaded terrorist Haq Gul enters the their apartment when Sanchi is alone in the house. Gul takes Sachi as a hostage to meet his demands. Inspector Malik ( Darshan Kumaar) steps in tactfully to resolve the situation with the calm support of Yathartha. But there’s more to the already precarious situation than what meets the eye. Sanchi can turn out to be a trouble with her dissociative identity disorder and Gul can make some grave errors of judgement while dealing with an imbalanced hostage in his captivity.

With a plot as interesting as this one, the makers of this thriller had some really engaging and intense material at hand. The film succeeds partially in offering various perspectives to offer the much needed edge of the seat thrills. But as it unfolds, certain subplots and character traits are reiterated that dilute those gripping moments.

The film offers some curious subplots and the characters have been penciled in with conviction, what the story lacks though is the finer nuances and tight editing to keep you engaged throughout. The editing could have been watertight to keep the flow of events pacy and the unmasking of key characters could have been dealt with more effectively. A special mention here for Amar Mohile’s background score and Amit Roy’s camerawork to heighten the drama. The dialogues could have been sharper and a little more realistic given the mystery elements starts unspooling themselves to propel the story engagingly. Dhokha Round D Corner: Khushalii Kumar Spills Beans About Her Character in Debut Film.

As far as the performances go, R Madhavan shows the prowess of his restraint performance. His subtlety gives much gravitas to the proceedings. Darshan Kumaar as the sharp inspector delivers with maturity and wins our vote. The two effectively portray helplessness and vulnerability of their respective characters given the situation they are trapped in. Aparshakti Khurrana is spot on with his Kashmiri accent and strikes an impression with his performance. Debutante Khushalii Kumar looks sensuous as she blends the complexity of her character with the vulnerability at play to make a confident debut.

Dhokha Round D Corner is an interesting tale with too many twists and turns that start flowing too late into its run time, but the film manages to offers some thrills to make this one a one time watch.

(The above story first appeared on Today News 24 on Sep 23, 2022 01:30 PM IST. For more news and updates on politics, world, sports, entertainment and lifestyle, log on to our website todaynews24.top).