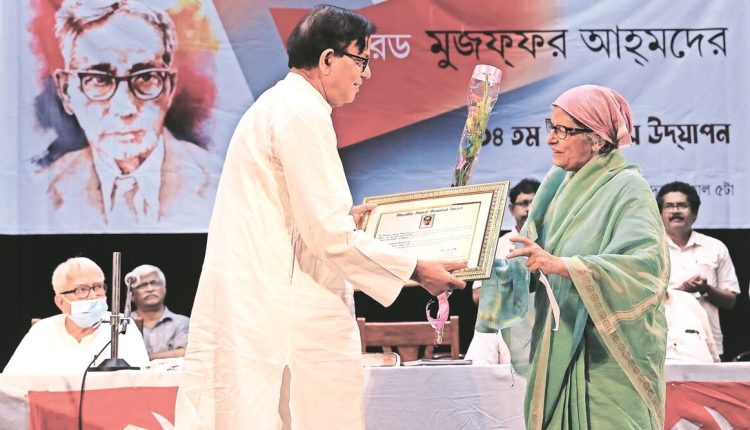 Weeks after “refusing” to accept the Mamata Banerjee government’s prestigious Banga Bibhushan award, Nobel laureate Amartya Sen on Friday received the Muzaffar Ahmad Memorial Prize for his book ‘Home in the World: A Memoir’ at an event organised by the Communist Party of India (Marxist) here.

Sen, who was not physically present to accept the award, said in a written statement that his family shared close ties with the stalwart CPM leader Muzaffar Ahmad. “By accepting this award, I humbly pay my huge respect and gratitude to the late Muzaffar Ahmad,” reads out Pratichi Trust director Dr Manabi Majumdar, who received the award on behalf of the Nobel laureate, from Sen’s statement.

The event is being held to commemorate the 134th birth centenary of ‘Kakababu’ Muzaffar Ahmad, one of the country’s pioneering leaders of the Communist Movement.

Muzaffar Ahmad Memorial Award Committee president Mridul Dey said, “It is a masterpiece of a book which takes us on a breathtaking journey of his life. The present crisis in the country, such as the impact of communalism and the severe repression of Rohingyas under the Myanmar military regime, has found a place in this book.”

Amartya Sen had last month expressed his inability to accept the Banga Bhushan award from the Mamata Banerjee government, fuelling speculation that the refusal came in the backdrop of the CBI and the ED probes into the SSC teachers’ recruitment scam and the subsequent arrest of top state minister and Trinamool Congress leader Partha Chatterjee.

TMC, meanwhile, criticised Sen for receiving the award from the CPM. State minister and TMC leader Babul Supriyo said, “He believes in a certain political ideology which does not match our ideals. He works and thinks in his own way and we have nothing to say on this. But he is basically a tourist. Despite being such a noted economist, he could not come out of his political ideologies.”