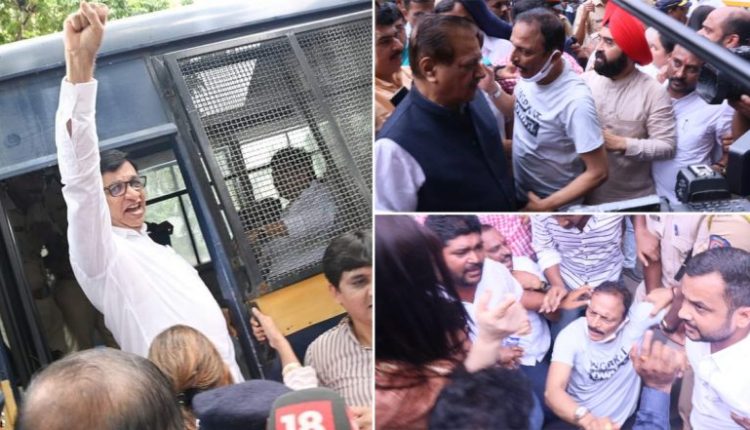 Mumbai, Aug 5: Scores of Congress leaders and workers were detained after they attempted to stage protests outside the Raj Bhavan here on Friday to highlight the issues of inflation and unemployment.

Led by Congress state President Nana Patole and city chief Bhai Jagtap, hundreds of leaders and activists carrying banners and posters and raising anti-government slogans, were stopped by a large posse of police near Vidhan Bhavan at Nariman Point as they marched towards the gubernatorial residence in Malabar Hill. Congress Protest: Party Workers Clash With Police in Patna, Stopped From Going to Governor Phagu Chauhan’s House (Watch Video)

“We are protesting democratically, peacefully and were going to Raj Bhavan to lodge our protest against the Bharatiya Janata Party-led Central government. The people are suffering under high prices and runaway inflation, the growing unemployment among the youth, the harassment due to the Goods & Services Tax, and related issue,” said Patole.

Flaying the police action, Thorat said that in a democracy, “we have the right to protest” but the current BJP government is “trying to silence us”.

“Even before Independence, we had the right to protest and we shall continue to raise our voice against the hardships borne by the common masses,” declared Thorat.

The police also stopped vehicles sporting Congress flags and attempting to reach Raj Bhavan from different parts of Mumbai and the state as part of the all-India agitation, besides demonstrations carried out in other major cities in Maharashtra.

(The above story first appeared on Today News 24 on Aug 05, 2022 04:39 PM IST. For more news and updates on politics, world, sports, entertainment and lifestyle, log on to our website todaynews24.top).

Madhya Pradesh Shocker: Man Chops Off Son’s Hand for Refusing to Give Him Bike Keys in Damoh