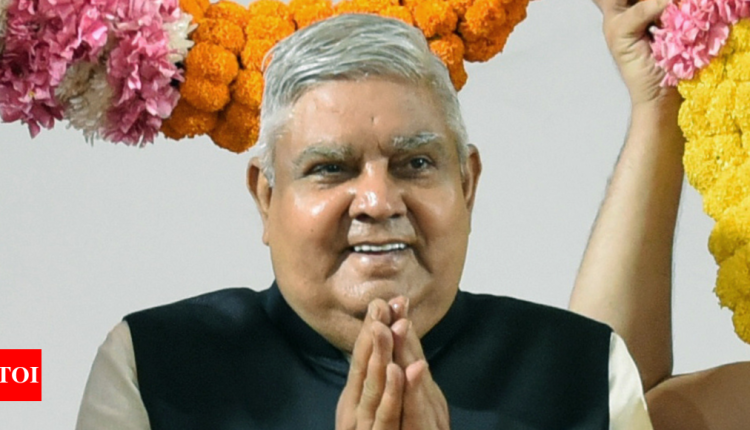 NEW DELHI: Congratulations poured in for Jagdeep Dhankhar after his election as India’s 14th vice president with Prime Minister Narendra Modi meeting him soon after the result was declared Saturday while top leaders of the BJP, Congress and other parties extended their greetings.
President Droupadi Murmu said the nation will benefit from Dhankar’s long and rich experience in public life and extended her best wishes for a productive and successful tenure.
Outgoing Vice President M Venkaiah Naidu also congratulated Dhankar and said, “The nation will greatly benefit from your vast experience and legal expertise. My best wishes for a successful and fruitful tenure.”
Congress president Sonia Gandhi and party leader Rahul Gandhi congratulated Dhankhar and thanked Margaret Alva for representing the spirit of the joint Opposition with grace and dignity.
Dhankhar won with a huge vote share of 74.36 per cent, the highest in the last six vice-presidential elections, with 528 votes against Alva’s 128 votes.
Congratulating Dhankhar for his victory, Alva noted that while this election is over, “the battle for protecting the Constitution, strengthening democracy and restoring Parliament’s dignity will continue.”
She hit out at some opposition parties for supporting the BJP in this election “directly or indirectly” and said it was an attempt to “derail” the idea of a united opposition.
Union minister Rajnath Singh said he is confident that Dhankhar will make an exceptional vice president and Rajya Sabha Chairman. His long public life, wide experience and deep understanding of people’s issues will certainly benefit the nation.
Echoing similar sentiments, Union home minister Amit Shah said, “Dhankhar will prove to be an ideal guardian of the Constitution while holding the post besides functioning as chairman of the Rajya Sabha.”
Several opposition leaders also congratulated Dhankhar on being elected as vice president. NCP supremo Sharad Pawar wished him success in his tenure as the Vice President.
Congratulating Dharkhar, DMK supremo and Tamil Nadu chief minister MK Stalin said, “Hope the ideals enshrined in our constitution will be upheld during your tenure besides strengthening the democratic debates in the Upper House.”
Ashok Gehlot, Congress leader and chief minister of Rajasthan, the state from where Dhankhar hails, said the people of the state are happy that Dhankhar has become the second vice president from Rajasthan after Bhairon Singh Shekhawat.