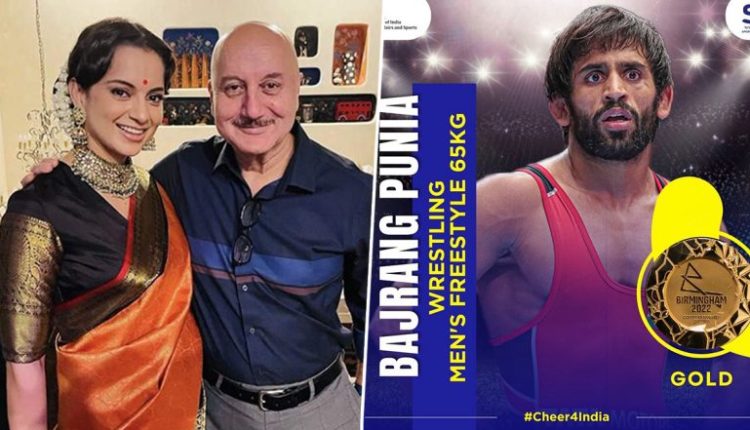 Actors Kangana Ranaut and Anupam Kher are extremely proud athletes who are currently representing India at the 22nd edition of the Commonwealth Games in Birmingham, England. Taking to Instagram, Kangana lauded the participants who have won several medals so far. Kangana Ranaut Reacts to Laal Singh Chaddha Controversy, Says ‘Negativity Around the Film Is Curated by Mastermind Aamir Khan Himself’.

“The way Indian sportspersons are taking over the world they will make sure being Indian never associated with any lack or weakness.. it will be synonymous of being superior and unbeatable, thank you team,” Kangana wrote. Kher shared a few pictures of the Indian athletes including Tejaswin Shankar, Tulika Maan and Sakshi Malik. Emergency: Shreyas Talpade To Play Atal Bihari Vajpayee In Kangana Ranaut’s Film! Check Out His First Look (View Pic).

Bajrang Punia successfully defended his title and won his second successive gold medal in CWGs. While Deepak Punia bagged his maiden medal in CWG and he got it done with gold under his kitty. Sakshi Malik also returned to her best and claimed gold to add more to India’s tally. Anshu Malik won the silver after losing the final bout, while Divya Kakran and Mohit Grewal won the bronze medals in their respective categories. India has now won six medals in wrestling on Friday – three golds, one silver and two bronze.

Men’s Lawn Bowls Fours team assured a medal for India as they defeated England to reach the final. While India women’s hockey team had to face a defeat in the semi-finals against Australia after a controversial decision from the referee followed by a below-par display by attackers in the penalty shootout.