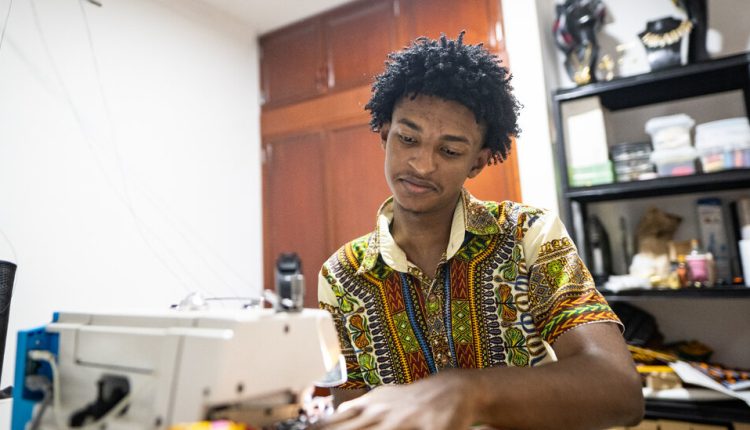 CALI, Colombia — At a premier fashion event in the coastal city of Buenaventura this year, a pair of towering models strutted down the boardwalk in a red minidress with a fluted top inspired by an open seashell and a blue-and-gold gown fit for a modern queen.

The models were Black and the fabrics imported from Africa — unusual for a major fashion show in Colombia. But what most distinguished them was the designer himself: Esteban Sinisterra Paz, a 23-year-old university student with no formal design training who is at the center of an Afro-Colombian fashion explosion.

“Decolonization of the human being,” is the aim of his work, he said, along with showing the world an expansive view of “the elegance of identity.”

Mr. Sinisterra is the man behind the wardrobe of Francia Márquez, an environmental activist and lawyer who on Sunday will become Colombia’s first Black vice president.

In a nation where race and class often define a person’s status, Ms. Márquez, 40, has made a remarkable leap from profound poverty to the presidential palace, emerging as the voice of millions of poor, Black and Indigenous Colombians.

In a matter of months, she has not only pushed racism and classism to the center of the national conversation, she has also revolutionized the country’s political aesthetic, rejecting starched shirts and suits in favor of a distinctly Afro-Colombian look that she calls a form of rebellion.

But Ms. Márquez and Mr. Sinisterra are just the most visible ambassadors of an Afro-Colombian aesthetic boom that proponents say is part of a larger movement demanding greater respect for millions of Black Colombians.

In a nation where 40 percent of households live on less than $100 a month — a percentage that has grown during the pandemic — Afro-Colombians are among the poorest groups, with the regions where they predominate, including the Pacific Coast, some of the most neglected by generations of politicians.

Officially, Black Colombians make up between 6 to 9 percent of the population. But many say that is an undercount that perpetuates a lack of recognition.

“Colonization tried to erase Black people,” said Lia Samantha Lozano, 41, who began outfitting her hip-hop and reggae band, Voodoo Souljahs, in African fabrics more than a decade ago, positioning her as a pioneer in the movement.

In 2014, she became the first Black woman with a runway show at Colombiamoda, the country’s biggest fashion event.

Today, politically oriented Afro-descendant brands have proliferated on the internet, and in shops across Cali, a major hub of Afro-Colombian culture, with Black celebrities, models, politicians and activists increasingly using clothing as a political tool. And the Petronio Álvarez Festival, an annual celebration of Afro-Colombian culture that draws hundreds of thousands of people to Cali, has emerged as the movement’s fashion week.

Ms. Lozano now sells a bright, hip-hop inspired line at a major shopping mall in the capital of Bogotá.

“A big part of the plan was to make us feel ashamed of who we are, of our colors, of our culture, of our features,” she went on. “To wear this every day, not as ‘fashion,’ not to dress up for a special occasion, but as a way of life, as something you want to communicate every day — yes, it is political. And, yes, it is a symbol of resistance.”

Among the movement’s signatures are bright patterned fabrics called wax, which are wildly popular across West, East and Central Africa and famous for telling stories and sending messages through their pictures and designs. (Prints can celebrate everything from pop culture to religion and politics, featuring tubes of lipstick, the faces of religious figures or portraits of politicians and celebrities.)

Afro-Colombian aesthetic often references nature — Mr. Sinisterra has a dress with sleeves like wings inspired by Colombia’s famous butterflies — and can incorporate elaborate beaded jewelry and woven bags by artists from Colombia’s many Indigenous communities.

The movement’s leaders include not just Ms. Márquez, but also Emilia Eneyda Valencia Murraín, 62, a mentor of Mr. Sinisterra’s who in 2004 started Weaving Hope, a multiday celebration of Black hair in Cali.

Colombia’s sartorial moment is years, many would say centuries, in the making, drawing on activism in Latin America, Africa and the United States; the baggy street style of hip-hop and the sparkly astral vibes of Afrofuturism; the turbans of Colombian market women; the mermaid silhouettes of Senegal and Nigeria; and even the influence of Michelle Obama, who famously used clothing to make political statements.

The aesthetic is also expansive and fluid, including everyday clothing — like tunics from the brand Baobab by Consuelo Cruz Arboleda — and showpieces like Mr. Sinisterra’s Royal Imperialism, a tight, ruffled strapless gown whose grandeur he said embodies the modern-day cultural empire that the descendants of Africa have constructed in the Colombian Pacific.

“We are transforming the image that we have of power,” said Edna Liliana Valencia, 36, a popular Afro-Colombian journalist, poet and activist.

Mr. Sinisterra is among this movement’s newest stars. Born into a poor family in the small town of Santa Bárbara de Iscuandé, near the Pacific Ocean, his family was forcibly displaced by armed men when he was 5, among the millions of Colombians victimized by the country’s decades-long internal conflict.

In the nearby town of Guapi, and later in the port city of Buenaventura, Mr. Sinisterra learned to sew from his aunt and grandmother, whom he called “the designers of the neighborhood.”

“Esteban African,” he said of his clothing line, “began out of a necessity to bring money home.”

Mr. Sinisterra wanted to study fashion, but his father thought that was only for girls, so he entered university as a social work student.

But he began building a name designing increasingly elaborate pieces for a growing list of customers, finding inspiration online and selling his work on Instagram and Facebook. Then, in 2019, Ms. Márquez called. She had been referred to him by a mutual friend and needed an outfit.

Mr. Sinisterra is in his seventh of eight semesters at university. When he’s not in class, he sews the vice president’s outfits in a windowless room in his small apartment in Cali. His boyfriend, Andrés Mena, 27, is a former nurse who switched careers to become general manager of Esteban African.

Among the brand’s best known items are two pairs of earrings. One features the map of Colombia, etched with its 32 departments. A second looks like two gold orbs meant to evoke the mining pans Ms. Márquez used as a child miner in the mountains of Cauca, near the Pacific Coast, long before she became a household name.

Ms. Márquez once slept on a dirt floor beside her siblings. She later worked as a live-in maid to support her children, went to law school and eventually won a prize known as the environmental Nobel.

In an interview, she called Mr. Sinisterra’s work a critical part of her political identity. “He’s showing young people that they can succeed, using their talent, they can get ahead,” she said.

Mr. Sinisterra has never been to Africa. A visit is his dream, along with studying fashion in Paris and “building a school where the children of the Pacific can have alternatives,” he said, “and their parents, unlike mine, will not think that sewing and cutting and making clothes is only for girls.”

Today, he said, his father is proud of his work.

Lately, he has been barraged by media and customer requests, and he manages his newfound fame by working around the clock.

One day in July, barefoot and sweating, he laid a pair of fabrics on the floor, cut them freehand, then stitched them together using a new Jinthex sewing machine he’d bought with his now improving wages. He was making another dress for Ms. Márquez.

On Election Day in June, he outfitted her in kente cloth, a Ghanaian print whose interlocking lines evoke basket weavings, to symbolize vote collection.

The dress had a ruffle down the front, representing the rivers in Ms. Márquez’s home region, and the jacket on her shoulders, all white, symbolized peace, he said, “in this country so torn up by political postures.”

He’s made three outfits for inauguration day. “Whichever she chooses is fine with me,” he said.

As he ironed the newly stitched piece, he said he was both excited and anxious about Ms. Márquez’s ascension to power.

In the last few months, he has come to feel like a part of her political project, and she has made enormous promises to transform the country after decades of injustice.

“The responsibility is going to grow,” he said.

How Argentines Cope With Inflation That’s 64% and Rising