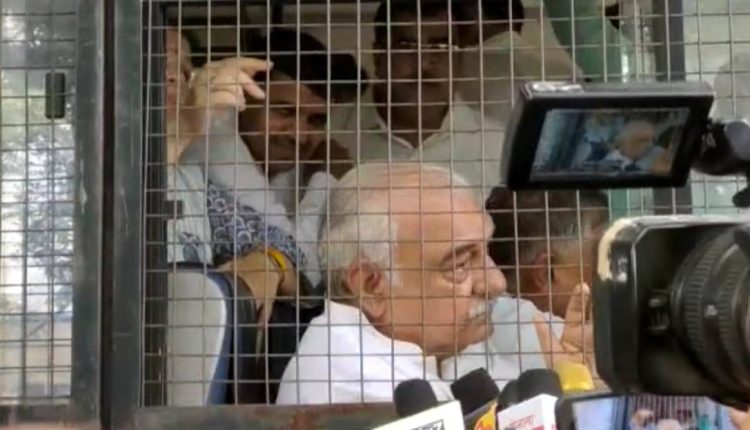 Amid nationwide protests by the Congress on the issues of inflation, unemployment and GST on essential food items, Haryana Congress workers, led by Haryana Pradesh Congress Committee president Udai Bhan and Congress Legislature Party leader Bhupinder Singh Hooda, were detained by the police Friday as they held a protest march in Chandigarh.

The Congress leaders, who started the protest march this noon from Congress party headquarters in Sector 9, were headed to Haryana Raj Bhavan but they were not allowed to reach the governor’s residence.

A large number of Congress party workers, including Hooda, Udai Bhan and several Congress MLAs, were detained by the Chandigarh Police and not allowed to march forward. They were taken to Sector 3 police station.

“You all can see what kind of dictatorial attitude is being adopted in the entire country. Police are being misused. We were holding a peaceful demonstration against the price rise and rising unemployment across the nation. We are not being allowed to raise the voice of people. We cannot talk about unemployment. We cannot talk about rising prices,” Udai Bhan told the media.

A number of Congress leaders were made to board a bus by the Chandigarh Police and taken to Sector 3 police station.

Ramkishan Gujjar, one of the four working presidents of Haryana Pradesh Congress Committee, said, “We were scheduled to gherao Raj Bhavan, but we were stopped on the way and not allowed to march forward. Irrespective of what the governments do to us, we shall not relent. Even if we are required to sit on the roads, we shall do all that but continue to raise the voice of the people who are getting badly affected due to this continuing price rise”.

Congress MLA Jagbir Malik said, “Our voice is being silenced forcefully, but the BJP will not be able to silence us even if we are killed. We shall not take rest till we topple this dictatorial regime in 2024 polls”.

The Congress MLAs detained by Chandigarh police were carrying national flags and shouting slogans against the price rise, unemployment and GST.

Raveena Tandon, in a stunning dress, is painting Instagram blue