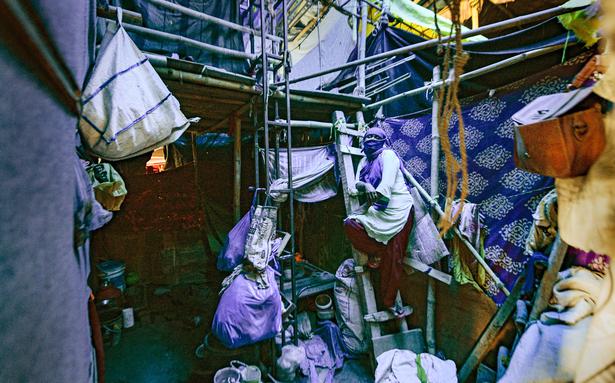 Efforts to find a “medium to long-term” residential solution for over 50 Rohingya refugee families, consisting of an estimated 250 people, under the eyes of the local police are at the core of the latest political tussle between the BJP-led Centre and the Aam Aadmi Party-led (AAP) Delhi government.

In the works for over a year, a fire at the Rohingya camp in Kanchan Kunj near Kalindi Kunj on June 21, 2021, which claimed 50 hutments, is understood to have triggered the move, according to the minutes of a meeting where it was decided upon, Delhi government sources said.

“It was proposed that these refugees can be shifted to 240 EWS DUSIB Flats constructed at Bakkarwala, which were inspected and found suitable for housing Rohingya,” the minutes stated.

According to a source, the point was to be able to shift all the refugees to one place on the basis of police intelligence inputs recommending it.

After they settled in the Capital in 2012 for a protest outside the UN High Commission for Refugees (UNHCR) office in Vasant Vihar, the source said, suggestions had been occasionally received from NGOs regarding the relocation of the Rohingya refugees to rented accommodations in nearby locations.

“However, as per inputs of Delhi Police departments, the staying of Rohingya persons in close vicinity would be necessary for the police to ensure their regular enumeration/observation” the minutes stated.

A meeting on the issue, held on January 10, 2022, led to a decision to the effect that the Foreigners Regional Registration Office (FRRO) should take the responsibility of running the Bakkarwala Complex which the NDMC had allotted to it.

At another meeting on July 29, 2022, the Delhi Home department was asked to arrange the “immediate relocation” of the Rohingya families “to any appropriate location.”

“The Secretary, NDMC was directed to immediately hand over the 240 requisite number of EWS Flats at Bakkarwala to the FRRO after completion of water supply and other basic necessary arrangements,” the minutes stated, adding that this was to be done within a week.

The EWS flats, according to the minutes, were to be taken over for the purpose of the creation of a “detention centre” by August 2022.

“The Central government hatched a conspiracy with the Lieutenant Governor to permanently settle Rohingya in Delhi by bypassing the elected government and the Chief Minister,” Delhi Deputy Chief Minister Manish Sisodia alleged.

Also read: Explained | How bad is the global refugee crisis?

“The Centre specifically instructed officers of the Delhi government and the Delhi Police to keep the Chief Minister and the Ministers in the dark and settle Rohingya in Delhi behind their back,” he also alleged.

In response, the Delhi BJP accused the AAP Delhi government of stalling the process of designating Rohingya camps as detention centres and openly “giving protection” to them.

“On June 23, 2021, the Kejriwal government itself had proposed to relocate Rohingya to a new place that should be built in Bakkarwala,” Delhi BJP president Daesh Gupta alleged.

“The Ministry of Home Affairs has clearly said that according to the rules, Rohingya living illegally should be kept in detention centres, but till date the Kejriwal government has not relocated Rohingya to detention centres after identifying places for them to live,” he added.