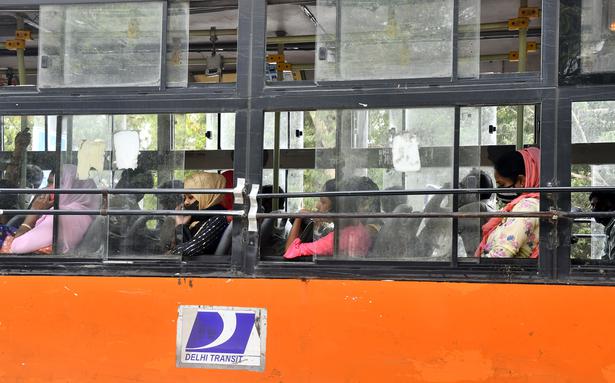 A 23-year-old female bus marshal allegedly tried to kill herself after facing sexual harassment at work.

The Delhi Commission for Women (DCW) issued notices to the city police and the Delhi Transport Corporation on Monday in connection with the incident. An FIR has been registered at the Keshavpuram police station against the accused, the police said on Monday.

A senior police officer said the victim had earlier informed them that she did not want to take legal action against the accused as he had apologised to her. The police station had not received any call regarding her attempt to kill herself, said the officer.

The woman was deployed as a DTC bus marshal at Subhash Place depot on May 20. She told the DCW that a bus conductor allegedly started asking her for sexual favours and also took ₹25,000 for her transfer from the depot, the commission said.

No action on complaints

“Despite complaints to the depot’s higher officials, no action was taken. Subsequently, the depot manager and other staff, including some bus drivers and conductors, started harassing her,” the panel added.

The victim approached the police against the depot staff and a complaint was registered. However, the depot manager and other staff forced her to compromise in the matter, the DCW said.

The police said on July 17, they had received a PCR call at Keshavpuram police station from a woman who alleged abuse and physical assault by her colleague at Subhash Place bus depot.

The victim told police that she had an argument with the accused over duty roster and he abused her and pushed her, the police said. The complainant, however, gave in writing that she did not want any legal action against the accused since he had apologised and she had not suffered injuries, the police said.

In her complaint to the DCW, the woman said on July 20, she was “terminated from duty” but she approached the SDM concerned, who sent her back to join the depot again. The depot manager and other staff, however, refused to let her resume work and asked her to withdraw her complaint, the panel said.

Deputy Commissioner of Police (North West) Usha Rangnani said on July 23, the victim came to the police station with her advocate and submitted a complaint alleging harassment by some DTC employees. The victim also complained against the depot manager for inaction on her complaint.

Both the parties were called for verification of facts. According to the police, the accused said a departmental enquiry was initiated against the complainant on July 1 over her “misconduct” and she was terminated from her job on July 20. The complainant was also called for an examination of facts but she did not come, they added.

On August 5, she tried to kill herself, the commission said. “The commission has taken this matter seriously and has issued notices to Delhi Police and DTC seeking an action taken report in the matter,” DCW Chief Swati Maliwal said.

DCW has asked DTC whether the matter was referred to Internal Complaints Committee under the prevention of sexual harassment at workplace law.

The DCP said on Monday, information was received regarding the victim’s hospitalisation. The IO visited the hospital and got the victim counselled. Her statement was recorded in which she levelled allegations of harassment against Kuldeep, Vishal, Inderdev Singh, Bablu and Rampal (all DTC employees).

A case under Sections 354A, 506, 509 of IPC has been registered and investigation is under way, the DCP said, adding that the victim’s condition is stable and she has been discharged from the hospital after treatment.

Talking about the working condition of women bus marshals, a DCW spokesperson said they have not received many complaints regarding their harassment at workplace.

With a view to boost the safety of women bus passengers, the Delhi Transport Corporation introduced 1,000 marshals in June 2015. In October 2019, Chief Minister Arvind Kejriwal announced that the Capital will see the deployment of as many as 13,000 marshals aboard State-run buses.

“The safety of women is most important for us and women should feel safe at all times,” the CM had said.

Summi Joshi, 26, a bus marshal since 2019 who travels on the Uttam Nagar-Badarpur route, said during her eight-hour shift she maintains eye contact with all female passengers. “I can sense it when a woman is feeling uncomfortable. I ensure that they feel safe throughout the journey,” Ms. Joshi said, adding that if any passenger feels unsafe because of another passenger, she asks them to change their seats.

She said sometimes she doesn’t feel safe inside the bus herself. “Men pass remarks and make me feel uncomfortable, but I respond firmly.” On the behaviour of male colleagues, she said she hasn’t faced any discomfort because of them.

Another bus marshal, Nisha Devi, 46, who travels on the Najafgarh-Jhatikra route, said she prefers the morning shift because of her personal safety. “It is difficult to travel at night as men can be seen loitering around in areas of outer Delhi,” she said.

Explaining her duties as a marshal, Ms. Devi said a marshal is responsible to maintain a safe space for all. Women shouldn’t feel unsafe on the bus, the bus driver and conductor should stop the buses at all stops, women and elderly should be able to find seats and no criminal activities should be carried out inside the bus, Ms. Devi added.

She said when she joined as a marshal the buses felt unsafe. However, with time, she learnt to deal with the challenges at work.