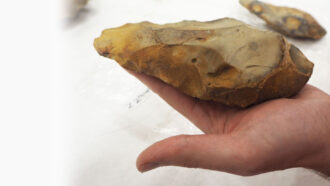 In the 1920s, laborers and amateur archaeologists at gravel quarry pits in southeastern England uncovered more than 300 ancient, sharp-edged oval tools. Researchers have long suspected that these hand axes were made 500,000 to 700,000 years ago. A new study confirms that suspicion in the first systematic excavation of the site, known as Fordwich.

Dating those tools and more recent finds suggests that humanlike folk inhabited the area between about 560,000 and 620,000 years ago, researchers report in the June Royal Society Open Science. Relatively warm conditions at that time drew hominids to what’s now northern Europe before the evolutionary rise of Neandertals and Homo sapiens.

The results confirm that Fordwich is one of the oldest hominid sites in England. Previous discoveries place hominids in what’s now southeastern England at least 840,000 years ago (SN: 7/7/10) and perhaps as far back as nearly 1 million years ago (SN: 2/11/14). No hominid fossils have been found at Fordwich. It’s unclear which species of the human genus made the tools.

In 2020, archaeologist Alastair Key of the University of Cambridge and colleagues unearthed 238 stone artifacts at Fordwich that display grooves created by striking the surface with another stone. Other finds include three stones with resharpened edges, presumably used to scrape objects like animal hides.

A method for determining when sediment layers were last exposed to sunlight indicated that the newly discovered artifacts date to roughly 542,000 years ago. The previously unearthed hand axes probably came from the same sediment.

Hominids must have fashioned tools at Fordwich a bit earlier than 542,000 years ago because ancient climate data suggest that an ice age at that time made it hard to survive in northern Europe, the team concludes. Warmer conditions between 560,000 and 620,000 years ago would have enabled the hominid toolmakers to live so far north.