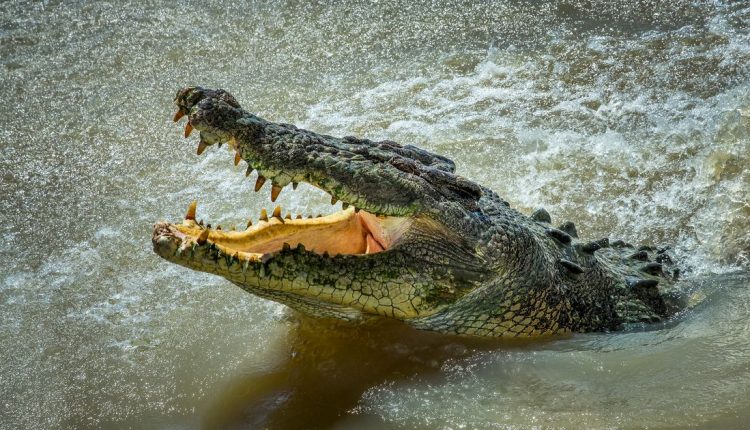 The man was swimming behind a waterfall at Adels Grove in Queensland, Australia, when he startled the crocodile causing it to attack and grip onto his arm

A crocodile pictured at Adelaide River in Australia (stock image) (

A man on a tour of Australia managed to save himself from a deadly crocodile with just his one free hand.

The adventurer, 40, was swimming at Adels Grove in Queensland on Sunday when the freshwater croc emerged and latched onto one of his hands.

The man had accidentally startled the croc when he swam behind a waterfall near Boodjamulla National Park.

But he managed to wrestle himself free despite the beast holding onto one of his hands with his razor sharp teeth.

Aircrew officer Greig Allan, of RACQ Lifeflight Rescue, said the man was lucky to escape with his life.

“He was trying to get himself into a waterfall and didn’t see the croc.,” he told 9News.

“So when he reached in, the croc was startled and latched onto his arm.

“He had lacerations to his arm and he managed to wrestle himself free, which is just amazing, with his one good hand but in doing so created a whole lot of other injuries, puncture wounds to both hands.”

The man had been on a motorbike tour in a remote part of Australia when the croc struck.

His fellow bikers drove him to a nearby airstrip and gave him first aid to stop the bleeding before he was airlifted to hospital.

Mr Allan said that the man was left with “significant injuries” after freeing himself from its grip.

“As you can imagine, a two to three metre croc grabbing you by the arm is going to create some pretty significant injuries which is what he had,” Mr Allan said.

A rescue helicopter was called at around 2pm.

“He was in a lot of pain and the puncture wounds from the croc’s teeth were very deep,” Mr Allan said.

“As the croc left, it had another little nip at his leg just for good measure.”

Supt Brad Hardy, of Queensland Ambulance Service, said there is a large population of freshwater crocs in the area.

But they do not usually pose a threat unless they are startled by humans.

He said: “They are normally quite timid but when they are surprised they will be aggressive.”

A crocodile pictured in Burundi, Africa
(

Michelle Lomo, who used to own Adels Grove, said freshwater crocodiles can become aggressive if they feel threatened.

She added: “What happens is, if people arrive at a certain location where the croc is behind the waterfall, they get stuck behind there because they don’t want to come out.”

The freshwater crocodile is found in northern parts of Australia.

It is also known as the Australian freshwater crocodile, Johnstone’s crocodile or freshie.

Unlike the much larger Australian saltwater crocodile, they are not known as man eaters and bite in self defence.

Brief, nonfatal attacks are often put down to mistaken identity.