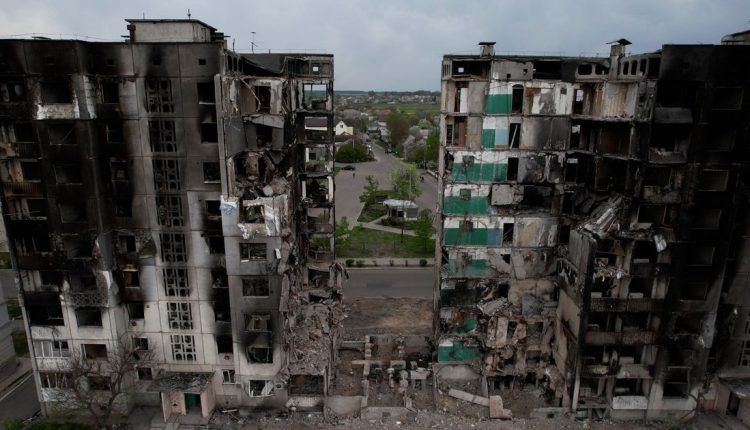 War crimes appear to have been uncovered in Borodyanka (

Horrific scenes of tortured and mutilated bodies have now been found in and around a bombed-out Ukraine town as war crime investigators gather more evidence against Russian troops.

The hellish scenes have reportedly been uncovered in four sites in the town of Borodyanka which compare to some of the worst atrocities carried out in Bucha, that shocked the world.

Borodyanka, which had a population of 25,000 people, began to be pummelled from Russian shelling when the Russian invasion began on February 24.

As the Russian forces bore down on Kyiv it tried to bomb towns on the outskirts like Borodyanka and Bucha into submission.

There is now evidence that at the same time it unleashed unthinkable horrors on the population with civilians tortured and murdered.

Buildings were brought to ruins by Russian shelling
(

Police chief Vyacheslav Tsilyurik told how the town centre was shelled which included the smashing of a statue of Ukraine poet Taras Shevchenko, reported The Sun.

The Ukrainians fought back, said Mr Tsilyurik: “We knew we had to fight back and so ambushed a column of them in the middle of town. We killed eight of them but they took their revenge the next day.”

Large apartment blocks were reduced to rubble with countless people buried in the ruins, while those who ventured out were indiscriminately shot in the street, he said.

The police chief said that people were tortured and women were raped in the barbarity which has seen 150 people die and 50 more are missing.

The death toll in nearby Bucha now stands at 412 people.

Many civilians were killed if they ventured out by Russians, it is reported
(

Borodyanka mayor Georgi Yerko, 60, arranged for evacuations with his daughter Galyna, 36, saying the scenes were even worse than that in Bucha.

She said: “It’s even worse than Bucha. It was more concentrated evil in a smaller town. The Russians knew my father’s email addresses and constantly emailed and texted death threats but we avoided them until liberation came. My father led us. He is a modest man but he is a hero.”

Police officer Ivan Symarov lost all his family in the bombings. His wife Lena, 26, father Vasile, 54, mother Natalia, 47, brother Petro, 21, and grandmother Nina, 82, all died immediately and his two-year-old daughter Polina later passed away in hospital.

“Putin’s animals had dropped a bomb on my home for no reason and I pulled at the rubble knowing I’d lost everything I loved,” he said.

A statue of a Ukraine poet was also toppled in Borodyanka
(

“I am alone in the world now thanks to Putin and the barbarians he sent to kill us. I’ve no idea if they targeted my home because I’m a policeman but it had no military value. It was cold-blooded murder.”

Ukraine has claimed that more than 10,000 possible war crimes have taken place and the country’s prosecutor general has now said that her office was readying 41 cases against Russian soldiers.

“We have 41 suspects in cases with which we will be ready to go to court. All of them concern Article 438 of the (Ukrainian) criminal code on war crimes, but different types of war crimes. There is the bombing of civilian infrastructure, the killing of civilians, rape and looting,” Iryna Venediktova said in a live briefing on Ukrainian TV on Friday evening.

It has been claimed that the atrocities in Borodyanka are even more barbaric than in Bucha, by one resident
(

Friday marked the first war crime prosecution of a member of the Russian military in Kyiv, as a 21-year-old Russian soldier went on trial for the killing of an unarmed Ukrainian civilian in the early days of the war.

Ms Venediktova said that two more of the suspects, who are physically in Ukraine, are likely to face preliminary hearings next week.

Ukraine has accused Russia of forcibly deporting more than 210,000 children since its invasion, saying they were among 1.2 million Ukrainians transferred against their will. The Kremlin says people have come to Russia to escape fighting.

Doctor Strange in the Multiverse of Madness writer Michael Waldron denies being forced to include Illuminati, opens up about reshoots