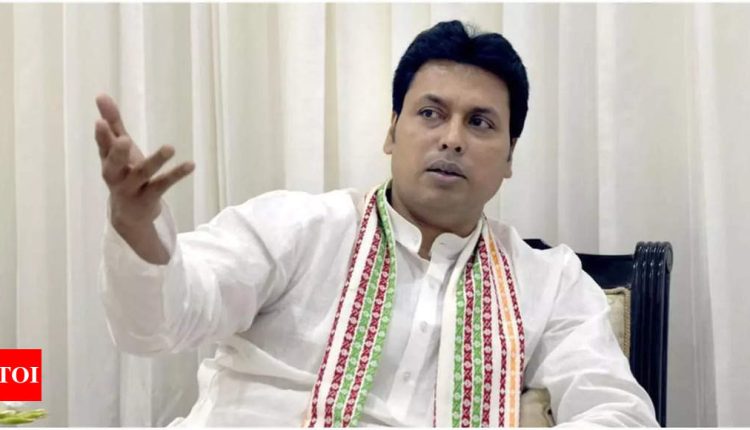 0
Share
NEW DELHI: In an abrupt move, Tripura chief minister Biplab Kumar Deb resigned on Saturday becoming the sixth CM to leave the top post in a BJP-led state in the past one year.
Deb said he submitted his resignation to Governor SN Arya. He had gone to New Delhi and met Union home minister Amit Shah and BJP president JP Nadda on May 12 for a confabulation on the party’s affairs in the Northeastern state.
“The party wants me to work to strengthen the organisation,” said Deb after resigning.
There have been rumours of infighting within the BJP’s state unit.
Bhupender Yadav and Vinod Tawde have been appointed as observers for election of BJP legislature party leader in Tripura. “A meeting of the legislative party will be held at 8 pm on Saturday and a new leader will be elected,” said Yadav.
Deputy chief minister Jishnu Dev Varma, who is related to the erstwhile Tripura royal family, is expected to take charge in the interim, sources said.
The state is slated to go to assembly elections next year.
Other CMs that have resigned in the past year
* Gujarat chief minister Vijay Rupani resigned on September 11, 2021.
* Karnataka chief minister BS Yediyurappa tendered his resignation on July 26, 2021
* The BJP replaced Uttarakhand CM Trivendra Singh Rawat with Tirath Singh Rawat on March 10, 2021.
* Tirath Singh Rawat could only serve for 3 months before he was replaced by Pushkar Singh Dhami on July 4, 2021.
* Sarbananda Sonowal was not allowed a second term as Assam CM after the 2021 assembly elections. Himanta Biswa Sarma took oath on May 10, 2021.
(With inputs from agencies)
0
Share