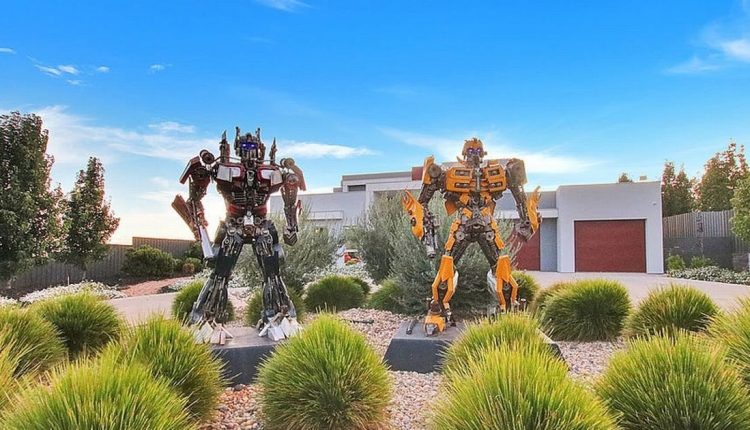 There is more to this six-bedroom mansion than meets the eye as a pair of heroic Autobots stand guard in the sprawling garden of the home.

The home, which has recently gone on the market, boasts a futuristic kitchen as well as a huge dining room with a built-in fire and a home gym.

Fun-loving would-be buyers however are sure to be delighted by the two guards standing outside- Transformers Optimus Prime and Bumblebee.

The unique home in south Australia has had a number of interested parties- no doubt boosted by the addition of protection from the robots in disguise from the planet Cybertron.

Two two Transformers can come with the home
(

Each Transformer is around 14ft tall and weighs more than 1.5 tonnes.

Selling agent Darrin Tranfadil, from Ray White, told Adelaide Now : “We’ve had quite a bit of interest and yes, the Transformers are negotiable as part of the sale.

“The owners are huge Transformers fans and the whole property has been designed around an indoor cinema and modern technology.

“They also have small kids, so the home has been great for their family, filled with so many toys.”

The mansion also has a basketball court and a swimming pool
(

The current owners seem to be movie buffs as the property – on the market with a guide price of around £1.8million- comes with an impressive home cinema with a starry sky ceiling and life size Ironman outfit.

In the UK, last week the Mirror reported on a dilapidated farmhouse once home to a man and his bull which was set to go under the hammer for just £175,000.

Pontious Piece Cottages is a four-bed home and the the former occupant, Tony Trewin, didn’t live in the house alone – he lived with Scrunch, a half-ton Highland cross bull.

Tony said Scrunch was the best pet and he loved living with the bull, but sadly both have now passed away and the property, near Liskeard, Cornwall, is going to auction with a guide price of £175,000.

As reported by Richard Smith for The Mirror in 2008, Tony and Scrunch would cosy up together to watch TV in the lounge and the big bull loved having his belly tickled.

Tony, who was 49 at the time, even fed him milk from a baby’s bottle every night before putting him to bed in the garden shed.

Speaking at the time, he said: “I know Scrunch is big and bulls aren’t known for their intelligence, but he’s as loyal and affectionate as any cat or dog. You couldn’t wish for a better pet.”

‘Urgent’ action needed to prevent the use of killer robots, experts warn