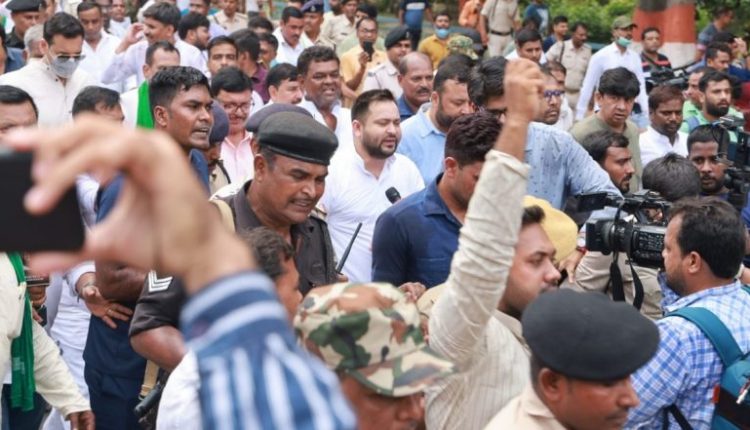 Patna, June 22: The opposition parties in Bihar protested against the Agnipath recruitment scheme on Wednesday as they took out a march from the Assembly to the Raj Bhavan in Patna.

“We handed over a memorandum to the governor, demanding immediate withdrawal of the Agnipath scheme, cancellation of all FIRs registered against the protestors in the state and release of students arrested during the protests,” Yadav told reporters after meeting Chouhan.

“The scheme is against students who are preparing for jobs in the defence services. The BJP-led central government is playing with the future of our youths. If youths are not satisfied with the nature of the job offered to them through this scheme, how will they perform the duties at the borders? The Centre should withdraw the Agnipath scheme,” said the RJD leader.

Yadav also questioned the “silence” of Chief Minister Nitish Kumar on the ongoing protests against the scheme. “The NDA government has sold the railways, Air India, airports, petroleum companies, and now interfering with the defense forces,” he alleged.

Hitting out, the leader of opposition in the assembly said BJP leaders are making a mockery of the country’s youths by promising security guard jobs at party offices on completion of service in the forces under the new scheme.