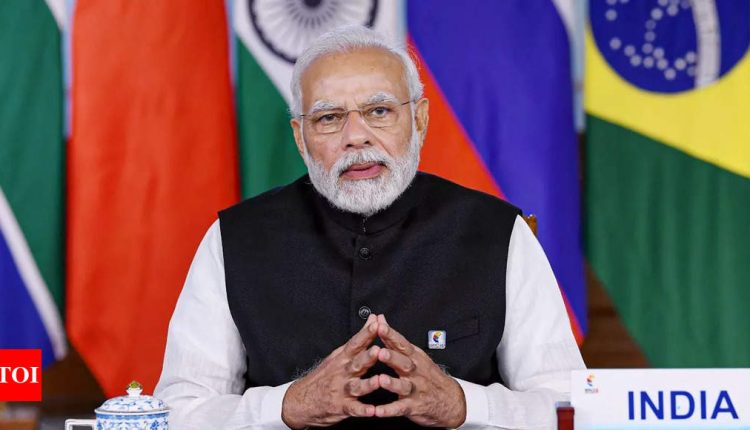 0
Share
NEW DELHI: The Brics meeting, where all countries recalled their national positions on Ukraine as expressed at the UNSC and UNGA, is taking place ahead of the G7 summit next week that will see PM Modi joining leading Western economies as they discuss ways to blunt Russia’s aggression in Ukraine.
China’s President Xi Jinping slammed the West in a Brics meeting on Wednesday for “weaponising” the world economy through the sanctions against Russia and also warned against any expansion of military ties.
India and China are among the few countries that haven’t condemned Russia’s actions in Ukraine.
Afghanistan was another major area of focus at Thursday’s meet, with member-states strongly supporting a peaceful, secure and stable Afghanistan while emphasising respect for its sovereignty, independence, territorial integrity, national unity and non-interference in its internal affairs.
Modi did not allude to the Ukraine situation in his opening remarks on Thursday and focused mostly on the pandemic. “Even though the scale of the epidemic has reduced globally than before, however many of its ill-effects are still visible in the global economy. We, the Brics member countries, have had a very similar view of the governance of the global economy. And so our mutual cooperation can make a useful contribution to post-Covid global recovery,” said Modi, while addressing Xi, Russian President Putin and their Brazilian and South African counterparts, Jair Bolsonaro and Cyril Ramaphosa.
“We support talks between Russia and Ukraine. We have also discussed our concerns over the humanitarian situation in and around Ukraine and expressed our support to efforts of the UN Secretary-General, UN Agencies and ICRC to provide humanitarian assistance in accordance with the basic principles of humanity, neutrality and impartiality established in UN General Assembly,” said the joint statement.
On Afghanistan, the joint statement said, “We emphasise the need for all sides to encourage the Afghanistan authorities to achieve national reconciliation through dialogue and negotiation, and to establish a broad-based and inclusive and representative political structure. We reaffirm the significance of relevant UNSC resolutions.” The summit emphasised that the Afghan territory should not be used to threaten or attack any country or shelter or train terrorists, or plan to finance terrorist acts, and reiterated the importance of combating terrorism in Afghanistan.
0
Share

Tips for Dealing With Neutropenia