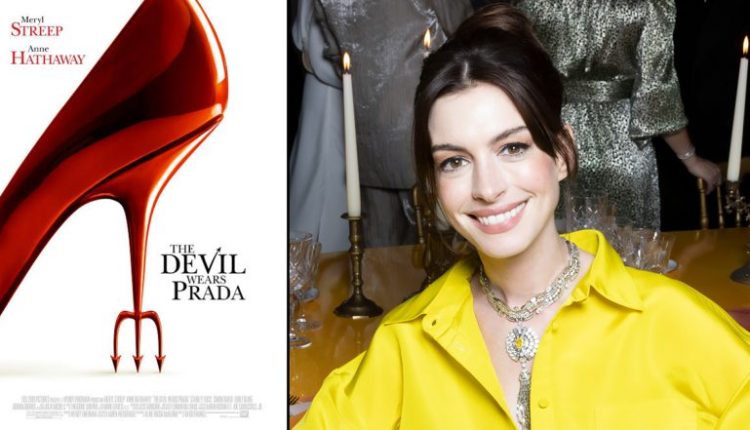 American actor Anne Hathaway celebrated the 16th anniversary of her film The Devil Wears Prada while taking a dig at the Roe vs Wade abortion bill.

Taking to Instagram, the Ocean’s 8 actor expressed her gratitude that the film, The Devil Wears Prada helped many to shape their lives and careers, reported E! News. Anne Hathaway Drops Stylish Pics With Priyanka Chopra Jonas and BLACKPINK’s Lisa from an Event in Paris!

Slamming the US Supreme Court’s decision of overturning the Roe Vs Wade which will hence worth allowing each state to decide whether to restrict or ban abortion, Hathaway claimed that she was honored to film the movie in a country that honoured women’s rights.

“Looking back on photos of this beloved film that shaped the lives and careers of so many–mine included–I am struck by the fact that the young female characters in this movie built their lives and careers in a country that honored their right to have choice over their own reproductive health,” captioned Hathaway on her post.

She added, “See you in the fight.” Hathaway posted a string of images from the movie featuring herself and her co-stars Meryl Streep and Emily Blunt.

Released on June 30 in 2006, the dramedy The Devil Wears Prada is based on the novel of the same name written by author Lauren Weisberger. According to E! News, the story revolves around an aspiring journalist Andy Sachs played by Hathaway who in order to set her footing in the world of publishing, takes up a job as an assistant to Miranda Priestly aka Meryl Streep, a ruthless editor of a fashion magazine.

However, during over a period of time, Sach learns about how cutthroat and cruel the fashion industry can be as well as the numerous sacrifices people make so that they are able to reach the top. Hathaway’s post marking 16 years of The Devil Wears Prada comes a week after, the US Supreme Court decided to strike down the Roe v. Wade, reported E! News. Armageddon Time Cannes Premiere: James Gray, Anne Hathaway and Jeremy Strong Get a 5-Minute Ovation (Watch Video)

Apart from the Oscar-winner, many celebrities like Cheryl Burke, singers Taylor Swift, Olivia Rodrigo, Selena Gomez and Keke Palmer have also opposed the US Supreme Court’s decision on abortion rights. Some have even shared their own abortion stories as well.

Priyanka Chopra is walking into the weekend looking stylish in tank top and denim shorts with Diana: See pic inside | Fashion Trends

The 8 most underrated films of June and where to watch them: From Dakota Johnson’s career-best performance to Jessie Buckley’s bonkers horror movie