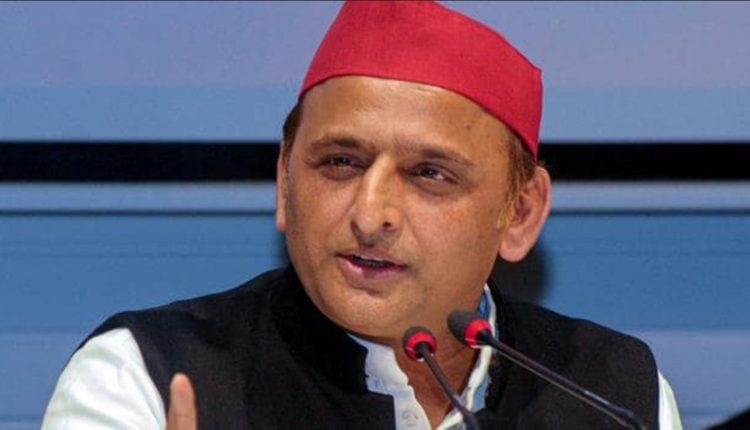 Lucknow: Under attack over fielding candidates with a criminal background in the Uttar Pradesh assembly polls, Samajwadi Party president Akhilesh Yadav on Tuesday alleged that his party leaders had been framed in false cases by the ruling Bharatiya Janata Party (BJP).

Flanked by veteran leader Azam Khan’s son Abdullah Azam who was recently released from jail and new entrant Swami Prasad Maurya, Akhilesh Yadav also claimed that the maximum number of MLAs with a criminal background were from the saffron party.

Akhilesh said this in response to media queries on a PIL which sought a direction from the Supreme Court to the Election Commission to de-register any political party which violated the directions of the apex court on making public information about their candidate’s criminal record.

The public interest litigation (PIL) cited the case of SP candidate from Kairana constituency – Nahid Hasan – who was arrested recently under the Gangster Act.

Terming the PIL as BJP-sponsored, the SP president said that going by this standard, the BJP would not be able to contest anywhere in the country. “The chief minister and deputy chief minister have a number of cases against them. The maximum number of MLAs with a criminal background has reached the assembly from the BJP,” he claimed.

To note, the BJP has been accusing the Samajwadi Party of sheltering gangsters and mafias during its rule in Uttar Pradesh.

“The Samajwadi Party, which has been protecting criminals, has now given tickets to anti-social elements and history -sheeters for several assembly seats, including Kairana, Muzaffarnagar, Siyana, Bulandshahr and Loni in western Uttar Pradesh,” chief minister Yogi Adityanath had said on Monday.

The SP chief, however, alleged that a large number of his party leaders had been framed in fake cases under the BJP government.

‘I have said this earlier also. A DM who had come from another state and wanted extension was posted in Rampur and he worked there as per the wishes of the government. An IPS who had charges against him was sent to Rampur to end his inquiry. During the past five years, the BJP lodged fake cases against Samajwadi Party leaders and Nahid Hasan also comes in this category,” Akhilesh Yadav claimed.

On senior leader Azam Khan, who is presently in jail, Akhilesh alleged that both the Congress and the BJP colluded in framing him.

On Prime Minister Narendra Modi addressing party workers in his parliamentary constituency-Varanasi through Namo app today, Akhilesh Yadav said that BJP was aware of how the elections were going to be conducted and so strengthened its digital medium while other parties were making the preparations now.

“We have an app which has been activated,” he said.