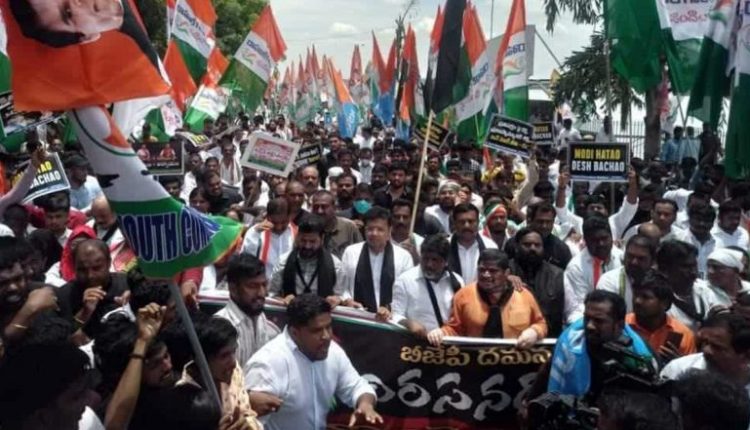 New Delhi, June 27: Congress on Monday held nationwide Satyagraha in more than 3,500 Assembly headquarters across the country against the Agnipath scheme, the party said.

Addressing a press conference, senior party leader Mohan Prakash said: “The Indian National Congress stands with the youth in their demand for an immediate rollback of the Agnipath scheme.  Agnipath Recruitment Row: ‘Hear Us Before Taking Any Decision’, Centre to Supreme Court on Pleas Against Recruitment Scheme

The BJP government should not weaken national security by implementing it.

The Government should provide security rather than insecurity to the lakhs of men and women who aspire to serve the nation by joining the Armed Forces.

The government has itself admitted to a shocking 1,25,000 non-commissioned vacancies in armed forces.”

The Monday Satyagraha against the scheme by the Indian National Congress follows a memorandum to the President requesting him to withdraw the controversial scheme.

“We urge the Prime Minister Narendra Modi to shun his arrogance and accede to the youth’s demand,” Prakash said.

The Congress said it stands with the lakhs of Ex-Servicemen who are concerned about the scheme’s impact on the ethos, unit cohesion and combat effectiveness of the Armed Forces. Introducing differential training standards and discriminatory pay and allowances among our soldiers threatens to disturb long-established standards with no clear benefit.

“We are concerned that such gimmicks are being experimented with at a time of deteriorating global security and rising threats to our borders. Just today there are reports of a continuing buildup of Chinese troops and infrastructure across the LAC, including upgraded armour, artillery, rocket systems, air defence systems and airfields. New divisions are being brought into the western sector and accommodation built for Chinese 1,20,000 troops,” he added.

The Congress demanded release of the youths, who have been put in various jails during the protest.

(The above story first appeared on Today News 24 on Jun 27, 2022 04:52 PM IST. For more news and updates on politics, world, sports, entertainment and lifestyle, log on to our website todaynews24.top).