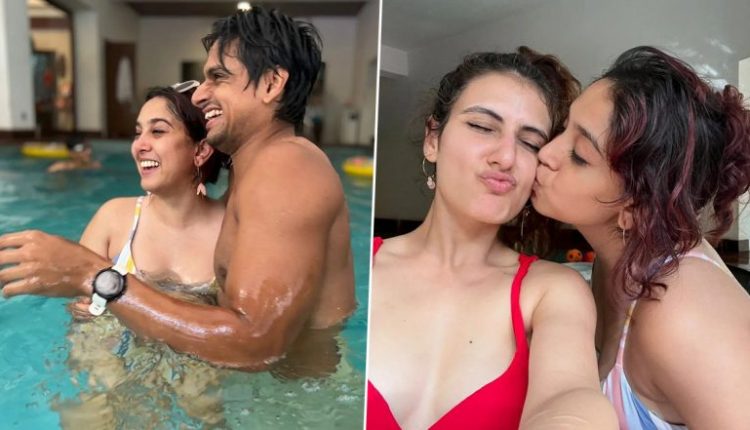 Aamir Khan’s daughter Ira Khan recently gave a befitting reply to the trolls after they criticised her for wearing a bikini around her father during her 25th birthday celebrations. Responding to the trolls, Ira Khan shared an array of new pictures from her birthday. Sharing a special message for the trolls, she wrote that she is giving them new content in case they are done hating on her previous pictures. Pics from Ira Khan’s Bikini Pool Party With Boyfriend Nupur Shikhare, Aamir Khan, Reena Dutta, Kiran Rao Go Viral!

The new pictures show her enjoying pool time with her friends and her boyfriend Nupur Shikhare. She captioned the post, “If everyone is done hating and trolling my last birthday photo dump… here are some more! (sic).” The last picture showed her giving a peck on the cheek of the ‘Dangal’ actress Fatima Sana Shaikh as they clicked a selfie together. While a lot of people on the Internet flooded Ira’s comments section raising questions on her choice of wearing a swimsuit in front of her father, playback singer Sona Mohapatra, who has sung ‘Bedardi Raja’ from Aamir’s 2011 release ‘Delhi Belly’, came to Ira’s defence. She hit back at trolls. Ira Khan Celebrates Eid With Boyfriend Nupur Shikhare, Cousin Imran Khan And Others; Aamir Khan’s Nephew Looks Unrecognisable (View Pics).

Sona wrote, “All the people outraging about Ira Khan’s choice of attire or linking it to what Aamir Khan said, did or didn’t in the past please note; she is 25. A free, thinking, adult woman. Is exercising her choices. Doesn’t need her dad’s approval or yours. BUZZ off. #Patriachy #India.”

(The above story first appeared on Today News 24 on May 16, 2022 04:53 PM IST. For more news and updates on politics, world, sports, entertainment and lifestyle, log on to our website todaynews24.top).