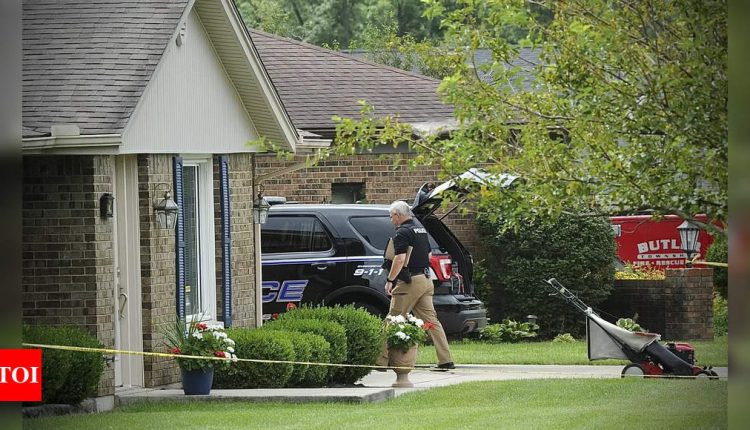 0
Share
DAYTON, OHIO: Four people were fatally shot in an Ohio neighborhood, authorities said Saturday as they searched for a man who is believed to be armed and dangerous.
Police in Montgomery County’s Butler Township said officers were called to the area shortly before noon Friday on a report of shots fired. Chief John Porter said four victims with gunshot wounds were found at “multiple crime scenes.” All were pronounced dead at the scene.
Police said they are seeking 39-year-old Stephen Marlow, who they believe fled the area in an SUV. They warned anyone seeing him or the vehicle to call 911 “and not approach him as he is still likely to be armed and dangerous.”
The Montgomery County coroner’s office on Saturday identified the victims as 82-year-old Clyde Knox, 78-year-old Eva Knox, 41-year-old Sarah Anderson and a 15-year-old girl whose name wasn’t released.
Porter said police don’t believe there is any ongoing threat to the neighborhood but officers would remain in the area in case he returns. He said it wasn’t immediately clear what led to the shooting. The Dayton Daily News reported that the four victims lived in separate homes near the home owned by Marlow’s parents.
“We are working to determine if there is any motive to this horrible tragedy or if mental illness played any role,” Porter said. He called the shooting “the first violent crime in this neighborhood in recent memory.”
The FBI field office in Cincinnati said it was part of the investigation and noted that Marlow had ties to Indianapolis, Chicago and Lexington, Kentucky, “and could be in one of these cities.”
The Dayton Daily News reported that Marlow had gotten off probation in February on aggravated burglary and aggravated menacing charges stemming from a July 2019 incident in the Dayton suburb of Vandalia, according to Montgomery County court records.
Vandalia closed a number of public areas Saturday as a precaution following the shooting, including the recreation center, Cassel Hills golf course and pool and the city’s senior citizens center, the newspaper reported.
Court documents don’t list an attorney representing Marlow; a message seeking comment was left Saturday at a number listed in his name.
0
Share