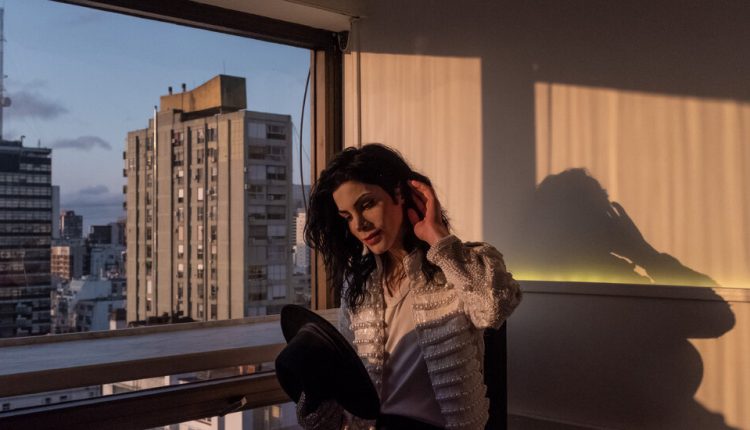 BUENOS AIRES — Alan Garcia starts each work day on a cracked plastic stool, hunched over a small vanity mirror, caking on makeup to lighten his skin.

He draws on sideburns. He pencils a cleft into his chin. And he pinches and lifts his nose with a thin strip of tape. After nearly three hours, his new face is instantly recognizable: Michael Jackson.

Then Mr. Garcia trudges to work.

Carrying a tattered suitcase stuffed with fedoras, a sequined jacket and one bedazzled glove, he boards a commuter train from his working-class suburb to downtown Buenos Aires, a two-hour trip.

Five days a week, he dances for tips on a busy pedestrian intersection — the same choreography to the same three songs. “Smooth Criminal.” “Thriller.” “Billie Jean.” Repeat. He takes home 3,000 pesos on a good day, or about $10.

Elsewhere in Argentina’s capital, Leo Blanco rehearses with four backup dancers for his Michael Jackson impersonation spectacular. The half-hour show features lights, smoke, eight songs, five outfit changes and a pair of trick shoes that enable him to tilt his body 45 degrees for Mr. Jackson’s “anti-gravity lean.” Mr. Blanco performs for weddings, quinceañeras and corporate events for 80,000 to 100,000 pesos, or $280 to $350.

Someone else usually does Mr. Blanco’s makeup, but he doesn’t need much. He has undergone 13 surgeries to help bring his appearance closer to his idol’s. He tattooed on sideburns and eyebrows, constructed a new silicone chin and is now on his seventh nose job.

Mr. Garcia, 33, and Mr. Blanco, 26, have both dedicated their lives to transforming themselves into the same pop star. But for all the surface similarities, the two men’s lives are otherwise a study in sharp contrasts.

Mr. Garcia’s father was a bus driver. Mr. Blanco’s was a banker.

Mr. Garcia sleeps on a mattress on the floor surrounded by Michael Jackson posters in a ground-floor apartment he shares with five other people. Mr. Blanco lives with his parents in a home with two walk-in closets for his outfits and a dance room for his rehearsals.

They both date Michael Jackson super fans they met on Facebook. Mr. Garcia’s girlfriend is a 41-year-old single mother with four children and 15 dogs. Mr. Blanco’s is a 26-year-old contortionist with 155,000 followers on TikTok.

After dancing for hours on the street each night, Mr. Garcia walks to a nearby McDonald’s, orders a hamburger and scrubs off his makeup in the bathroom. “Through makeup, I can build a character,” he said. “And then I can have my own separate life.”

Mr. Garcia and Mr. Blanco have been obsessed with Mr. Jackson since childhood.

When Mr. Garcia was 3, the pop star’s 1991 album “Dangerous” became his alarm clock, waking him each morning as the song boomed from his uncle’s house next door.

For his 5th birthday, his uncle gave him a fedora, and later a VHS recording of Mr. Jackson in concert. He memorized nearly every move, and his parents cheered him on.

He kept dancing, through school, and then jobs working at a factory and delivering pizzas. At 22, he got a makeup tutorial and was struck by his resemblance to Mr. Jackson. He started dancing for money.

At first, he struggled and fought with hecklers. Then a brief TV appearance led to a slew of private gigs. “For two years, it was nonstop,” he said.

But in 2014, with his family in financial crisis and forced to leave their home, Mr. Garcia felt his impersonator business wasn’t bringing in enough cash.

For the next seven years, Mr. Garcia drove a taxi, a freight truck and then a bus like his father. “Seven years sitting,” he said. “Seven years without dancing.”

Late last year, Mr. Garcia lost his freight job. Another dancer urged him to return to the streets, but he had sold his outfits and forgotten the moves. “I felt like that stage was over and done,” he said.

Days later, he called his friend back. “He put the music on, I heard the people clapping and then I remembered everything,” he said.

Mr. Blanco discovered his idol later in his childhood, at 11, on YouTube.

“Like all fans, the first time we see him, we fell in love,” Mr. Blanco said. “And if that didn’t happen to you, it probably won’t happen later.”

By 15, he was taking dance classes and getting surgery.

His first operation was to reduce the size of his ears. “I lost half an ear,” he said, pulling back his long, dyed-black locks to reveal an ear missing its top half — an operational mishap. “You would think that would stop me from wanting more surgeries.”

His first gig was a First Communion.

He has since performed in seven countries, including at a bar in Miami and a stint in Milan. He appeared on Argentine talk shows, amassed 675,000 followers on Instagram and got a new chin on a 2019 episode of a BBC reality show.

For all his success, Mr. Blanco said that he has struggled with self-confidence and that his surgeries have been his way to become the image of himself that he has in his head — not to transform himself into Mr. Jackson.

Mr. Blanco appeared conflicted over his ties to the pop star, who died in 2009. He stressed that he wanted to be seen as an artist, not an impersonator, despite always being dressed as Mr. Jackson in each interview.

When he wanted to show work he was proud of, it was images from a photo shoot he had directed for an Argentine magazine, not footage of him dancing. He claimed that sometimes he looked more like Sandra Bullock, or perhaps Edward Scissorhands. And he clarified that his style is simply based on Mr. Jackson’s, not replicating it. “He was more Louis XV,” he said. “I am much more futuristic.”

At his apartment on a recent Saturday, Mr. Garcia was sipping mate from a glittering gourd when he rose from his stool to point to a poster of Mr. Jackson. “I’m white,” he said. “But because of his illness, he was whiter.” He sat back down and began lightening his skin.

Mr. Garcia and Mr. Blanco are two light-skinned Latinos impersonating a Black man. While Mr. Garcia said no one had ever asked him about race in relation to his work, Mr. Blanco was confronted in 2020 on Instagram by Dean Morrow, a Black Michael Jackson impersonator from Philadelphia.

“My thing was: You’re getting your fame off Black artists and you’re not standing up for Black issues,” Mr. Morrow said.

Mr. Blanco said he was confused and hurt. “I cried,” he said. “Why does skin color matter so much if we’re talking about art?”

Mr. Morrow said that because of Mr. Jackson’s shifting skin color, which was at least partly caused by the skin disease vitiligo, almost anyone could imitate him. But as a result, he said, many tribute artists disregard Mr. Jackson’s Black heritage. “They look at Michael Jackson as a white man,” he said.

Mr. Morrow often asks other white imitators, “‘If Michael Jackson never turned white, would you still be a tribute Michael Jackson?’” he said. “It offends them because they know they wouldn’t.”

Imitating the King of Pop poses tricky questions. First, he faced numerous allegations that he molested young boys. He was acquitted of such charges in 2005, but more people have leveled accusations since.

Then there are the questions about race.

Margo Jefferson, a former critic for The New York Times who has written extensively about Black American culture, including a book on Michael Jackson, said that Mr. Jackson has long been impersonated by people of all ethnic backgrounds.

Mr. Jackson’s “performative legacies, the racial and gender crossovers, are available to a vast global culture,” she said. Whether imitators are doing something distasteful, however, boils down to whether they are impersonating the man well.

“Impersonation remains a somewhat mysterious and charged mode of performance,” she said.

On a recent Friday around sundown, Mr. Garcia arrived at his office, a patch of pavement in a busy pedestrian area downtown. He occasionally works birthday parties, but this is where he earns much of his money. He greeted his co-workers, three hip-hop dancers with a speaker plugged into an idling moped.

When there was enough of a crowd, the distinct bass line of “Smooth Criminal” sent Mr. Garcia and his backup dancers sashaying across the concrete. They danced for the next four hours. Mr. Garcia periodically made the rounds, collecting bills in his fedora.

“The street is the most difficult stage,” he said, noting he has dealt with drunks, hecklers and the police. But he is also regularly swarmed for selfies. “You generate something in people,” he said. “And what’s better than that as an artist?”

Mr. Blanco has never performed on the street. He said he admires Mr. Garcia. “Perhaps what I lack is the ability to face the public without everything I put into my show: the lights, makeup, costumes, dancers, scenery,” he said. “That way I feel safe, I feel contained. You put me on the street, and I’m ashamed.”

As Mr. Garcia ate at McDonald’s following his street show, Mr. Blanco was headed to a 1980s party across town, at one of Buenos Aires’s biggest clubs. “They didn’t hire me, but somehow I’ll probably end up working,” he said. “That’s the price of having such a famous person’s face.”

At 1 a.m., in sunglasses and a white jacket heavy with sequins, he walked to the V.I.P. entrance, past a long queue, turning heads along the way.

Inside, Mr. Blanco and his girlfriend canoodled in an exclusive section overlooking the crowd. Around 4:30 a.m., they decided to leave. Yet instead of taking a staircase to the exit, he headed down different stairs into the heart of the crowd.

As he pushed through, he was stopped by group after group for photos. One woman appeared visibly shaken. “Michael Jackson!” she screamed. To that point, the club still hadn’t played any of Mr. Jackson’s songs.

Then, right as Mr. Blanco arrived at the coat check, there was the loud creak of a door followed by footsteps across an empty room. It was “Thriller.”

Mr. Blanco looked at the pulsing crowd yards away. Then he retreated to a nearby secluded area with his girlfriend.

Didn’t he want to join the crowd and show off his moves? “No,” he replied. Tonight, he was going to dance in private.