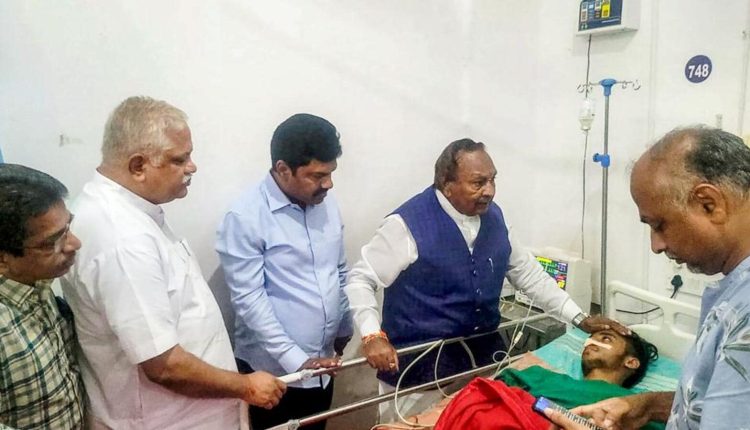 Shivamogga police on Friday said two associates of a person arrested in connection with the stabbing incident during a clash over VD Savarkar’s poster in Shivamogga last month have links to the Islamic State and executed trial bomb blasts on the bank of Tunga River recently. The duo was arrested on Tuesday.

Addressing the media, Shivamogga superintendent of police (SP), BM Laxmi Prasad, said initially four people were arrested by the Doddapete Police in connection with the August 15 stabbing of Prem Singh. Clashes broke out between two communities over putting up the banners of Hindutva ideologue Vinayak Damodar Savarkar and 18th-century Mysuru ruler Tipu Sultan. There was a commotion over the banner, after which four men stabbed Singh, police said.

“During the questioning of the four people, one of them, 24-year-old Shariq, pointed towards Maaz Muneer Ahmed (22) and Syed Yasin (21) – both engineering graduates – as his associates. Mangaluru city police had arrested Ahmed and Shariq in 2020 in a case related to painting pro-terror graffiti on the wall of a building,” the SP said on Friday.

On Tuesday, police arrested Ahmed and Yasin from Shivamogga and conducted raids across 11 locations as part of the investigations against the two.

The police, during the investigation, located the site of the trial blast and picked up remnants from the spot. “The accused had experimentally exploded the bomb made by them at a place locally known as Kemmangundi on the banks of Tunga River in Shivamogga district and the experimental blast was successful,” the SP said, adding, “The remnants were recovered with the help of the FSL team. We have found sulphur and phosphorus, which worked as detonators. The material will undergo chemical analysis,” he added.

“During our raids, we seized 14 mobiles, two laptops, remnants of the experimental bomb found at the site of the blast, materials required to make bombs and the half-burnt Indian national flag,” said Prasad.

Explaining the findings of the investigation, Prasad said that in the days following Independence Day, the Indian national flag was burnt near the spot where the bomb experimented and was video graphed on their mobile phones.

“The accused profess the ideology of Islamic State. They were of the view that India got independence merely from the British. But the real independence would be achieved only after establishing a caliphate and enforcing Sharia law,” the officer said.

Yasin, who did a course in electrical engineering, knew relay circuits. He had procured a gadget through an online store and battery, wire and other materials locally. “They did execute a low-intensity blast with a radius of three feet on an experimental basis. They had planned to conduct multiple such trials before taking up a bigger plan. They wanted to attack non-believers through jihad. We caught them before they could go ahead with the plan,” the officer said.

The officer said that the accused are members of the ISIS channel – Al Hayat – run on Telegram, a messenger application. “They were members of the channel that was only for one-way communication. So far, there is no information on a direct link with the banned organisation,” he said

Prasad said Syed Yasin and Muneer Ahmed had known each other since their pre-university days. They had travelled to Mangaluru then and had come in contact with Shariq.

“We are also looking into financial transactions among them. As of now, we learnt that the financial exchange among them happened through cryptocurrency,” the SP said.